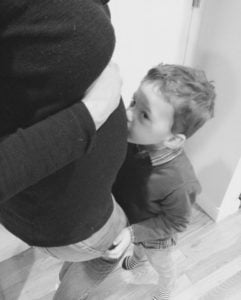 In early November, about a week before we moved into our new apartment — the bigger, three-bedroom apartment our family could grow into regardless of whether we remained just the three of us or were lucky enough to add a fourth Condellberry to the mix — we grabbed some dinner at Shake Shack one evening… Read more

So, the picture above was actually taken a week ago when I was 32 weeks, but I have it on good authority that I don’t look too much bigger this week. I do, however, look quite a bit different than I did at 28 weeks, as you can see. I’m also moving a lot more… Read more

If They Asked: Some Pregnancy Tips for Beyoncé (and Jay-Z)

Last night on the VMAs, Beyoncé announced that she and hubs, Jay-Z, are expectin’ a baby, which just goes to prove that Beyoncé and I have a ton in common: we’re both Virgos, we’re both married to 41-year-old hardcore Yankee fans, and we’re both knocked up! Why, we’re practically living identical lives. I’m not sure… Read more

As most of you know by now, I’m due to give birth in October, which, holy crap, isn’t that far away! I still have so much on my to-do list, like: choose a pediatrician, take childbirth classes, buy a crib, take a tour of the maternity ward at the hospital, decorate the nursery, plan a… Read more

As of Sunday, I’m now 28 weeks pregnant, which means I’m officially in my third trimester. And what a difference so far between this and my second trimester! Up until I left for my Midwest vacation less than three weeks ago, I was working out at the gym 3-4 times a week, going for long… Read more